During his visit to Cuba, the Prime Minister took questions from the host of the Vesti v Subbotu programme, Sergei Brilyov. 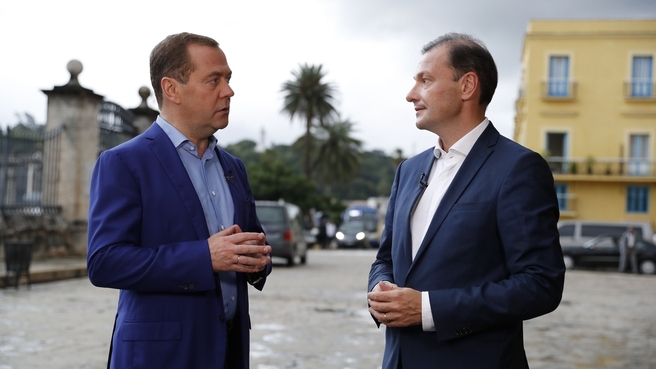 Sergei Brilyov: Mr Medvedev, Russia closed the base that the Soviet Union built on Cuba. Much is being said about re-opening it now that the situation has worsened. I’m not sure what exactly is being discussed, but if the Government is asked to allocate money from the state budget for this, will you do so?

Dmitry Medvedev: Strictly speaking, we did not have a base here in the Soviet times.

Dmitry Medvedev: There was a brigade. We are now discussing a variety of international scenarios with our Cuban friends. The situation in and around Cuba today is very complicated. Cuba has been under a blockade for almost 60 years and has received almost no investment other than assistance and support provided by the Soviet Union and former socialist countries. According to economists, over these years the amount of Cuba’s lost investment totals about $1 trillion, taking into account the location of Cuba and the lost opportunities. Now, the situation is even more complicated, as the current US administration has again adopted a very tough policy with regard to Cuba and imposed all kinds of sanctions, including personal.

Sergei Brilyov: In particular, they do not allow tankers to Cuba. The Cubans asked me if Russian ships can escort them.

Dmitry Medvedev: I think we will find other ways to help Cuba get oil and petroleum products. We discussed this today and agreed that we would draft a work plan for energy supplies to Cuba, bearing in mind conventional energy sources, hydrocarbons, and maybe some other available avenues. What we need to discuss is expanding economic ties with Cuba. In recent years, they have been quite successful. First, our trade has grown quite significantly, by 20 to 30 percent in recent years. Of course, that’s not a lot, but it translates into hundreds of millions of dollars. Second, investment is on the rise. We have just signed an agreement with the Cubans to renovate their entire railway system. It’s almost 1,000 kilometres.

Sergei Brilyov: I would even add, that means tens of thousands of new jobs in Russia.

Dmitry Medvedev: Tens of thousands of new jobs in our country and Cuba.

Sergei Brilyov: A Russia-Latin America forum was held in St Petersburg earlier this week. A young man stood up and said: “It all sounds very pretty with Cuba, but will it not end again, as in the Soviet years, because of strategic importance, in supplies instead of investment and trade?”

Everything has changed in the world. The Soviet Union is no longer there, and Cuba is changing, and there’s no question about any free help which would then have to be written off. All our relations are very pragmatic. Although they are friendly in nature and based on historical past, they are nevertheless relations between modern states. They should be mutually beneficial.

Sergei Brilyov: I will also remind our viewers that there’s a unique Russian-Cuban agreement. We wrote off 90 percent of Cuba’s debt, and they will repay 10 percent of it on terms that are very favourable for Russia. There’s a Cuban industry in which they accept only Russians without any competitive bids. But how good are they at paying the debt? 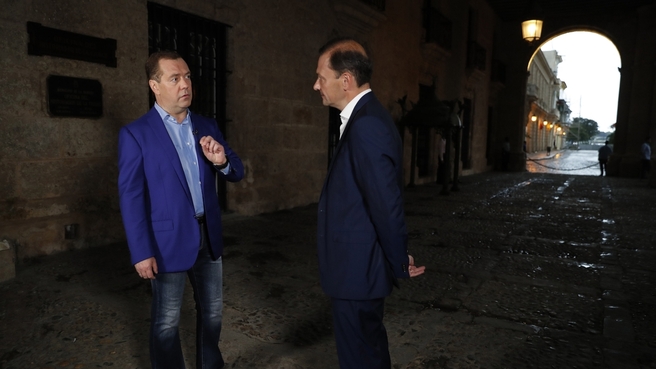 Dmitry Medvedev: Our Cuban friends are paying off their debt. Unlike what happened 20 to 30 years ago, in Soviet times, when no one was counting money at all, our Cuban friends are now paying. And even during the talks with the President of that country, he said several times that they would pay all their outstanding debts.

Sergei Brilyov: I will still go back to America since we are so close. What do military and political leaders in Moscow think in general about Zelensky’s appearance instead of the Russian story? So, it appears that he indeed interfered in the US elections?

Dmitry Medvedev: You know, as regards Ukraine-US relations, I can say for certain that I do not envy Mr Zelensky at all because he is between the hammer of the Democratic Party and the anvil of the Republican Party.

Sergei Brilyov: He has to make a choice because he will not be able to sit it out.

Dmitry Medvedev: If he continues the investigation and if it is carried out by the prosecutor whom he mentioned as his man, he will offend the Democrats. They will accuse him of interference in the US elections, as the Americans like doing. But if he blocs the investigation, it will appear strange because of the previous publications and he will offend the current Trump administration that he promised to help clear up some issues. So he is in a very difficult position.

Sergei Brilyov: I’d like to recall one amusing comparison made in the US press – that Zelensky will become Trump’s Monica Lewinsky.

Dmitry Medvedev: They are evil guys.

Sergei Brilyov: Do you feel that impeachment is likely in the United States?

Dmitry Medvedev: To be honest, this is their business. I am referring to the US political system. But they are locked in a serious battle. I am absolutely certain about this because for each of the two elements of the US political system this is a real opportunity to gain the upper hand. I don’t know what will happen eventually but they have a serious and fairly well-balanced system. I don’t think anything real critical will happen. Also, the US system has demonstrated its viability for centuries. It has been extremely tough in pursuing its interests all over the world and received relevant assessments. So, it seems to me we should not worry about them. Everything will develop normally there, but we will have to wait and see what repercussions this will have in other countries, including Ukraine. It is interesting to watch this process.

Sergei Brilyov: Tell me honestly, please, do such problems inside the United States allow Russia to act more proactively in Latin America? 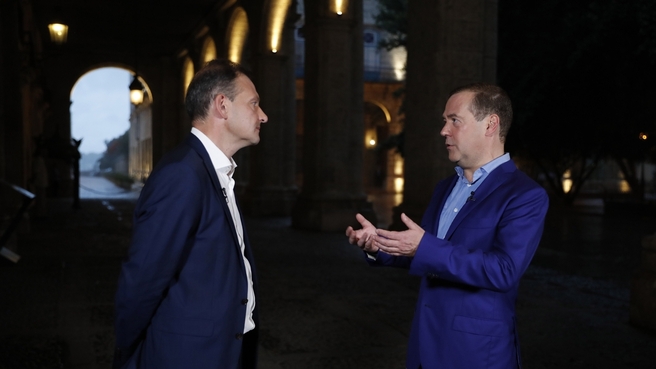 Dmitry Medvedev: It seems to me that the Americans are behaving like they always did in the past. This is not because of their mistakes, miscalculations or frequently wrong policy towards its neighbours, which is disrespectful, to put it mildly. No. We simply want to develop relations with all Latin American countries and Cuba is our traditional partner. It is really a close country for us. Many Cubans studied in Russia and we simply know their country well.

Sergei Brilyov: We see that Cuba is again under sanctions. Thus, personal sanctions have been imposed on Raul Castro. You met with him, didn’t you?

Dmitry Medvedev: Yes, I met him. He is very positive and speaks about this with a grin. He said: these are some incomprehensible, childish decisions. He is very wise and very adult. He will soon be 90. So he is absolutely calm about these things.

Sergei Brilyov: All his family is under US sanctions now…

Dmitry Medvedev: You understand what response this evokes – not only in Raul Castro’s family but in society in general. If this is done to one of the leaders of the country, First Secretary of the Central Committee of the Communist Party of Cuba, what is the US attitude towards all other people? So this is the general attitude of the United States to Cuba and its people. Moreover, this also leads to economic consequences. The people have to suffer, especially if there is an embargo, a ban on the supply of oil and petroleum products. So this obviously does not create good feelings towards the United States. Cubans do not become more disposed to it.

Sergei Brilyov: Did you and Raul Castro not discuss training brigades and new military bases? Believe me, the backstage here is overwhelmed with talking about this.

Dmitry Medvedev: Let them talk. I talked with him about cooperation, we recalled the past, our first meeting. Our relations have come a long way since then. I will be frank with you – when we met for the first time, things were really difficult with us, to be honest. That is, we had good relations but economic exchange was minor and there was practically no investment. And the decisions that we made back then that solved the situation with the debt, a whole number of decisions, deals concluded by large Russian companies, led to a situation where our vehicles are here again, as are our locomotives, and now the subject of railways is getting high on the agenda. We are also talking about the sale of airplanes and maintenance for those that are already here.

I was surprised, for example, to find that our Cuban friends buy wheat in Canada and France like we did in Soviet times. But I think we can deliver wheat to Cubans on no less acceptable terms and ensure reliable food security for them. Oil deliveries may be cut off, but if the United States makes a decision to ban food supplies or to put them under control, this is no laughing matter. And in this sense our Cuban friends appreciate our proposals.

Sergei Brilyov: Back in the Soviet Union a standard Spanish-language textbook had a text about “my friend at Havana University.” There are more Cuban students in Russia now whereas the stream of Russian students here ran dry. Did you discuss this? Because Cuba is a good, friendly, Spanish-speaking country. It’s only right to come here to study. 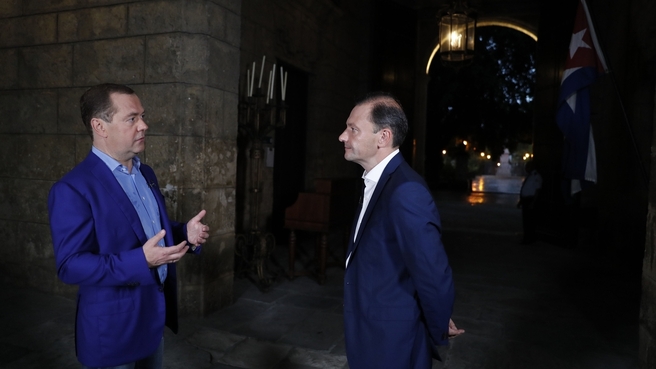 Dmitry Medvedev: Absolutely. Actually, I shall visit Havana University. The university is excellent. It was established just four years later than St Petersburg University. But indeed, I think it right that as many of our students as possible should come here to study, for internship. They can be both undergraduate and postgraduate students, probably. Of course, it is good to increase student exchanges. It is necessary to have good command of Spanish, you know it too well. And it is possible to have it here, at least the Cuban variant of the Spanish language. As I understand, it is still somewhat different from the continental Spanish.

Sergei Brilyov: Today, many agreements have been signed. Nevertheless, Miguel Diaz-Canel says he will be going to Moscow soon. Does this mean something else will be signed? Are there other matters being discussed?

Dmitry Medvedev: No, these will be working meetings, and it is just a reason to come to Eurasia. One of the events will be hosted by Baku: the Non-Aligned Movement. Our Cuban friends take part in that event.

Dmitry Medvedev: Historically. Plus there is another reason to visit our country – May 9 of next year.

Sergei Brilyov: This is next year, but what about now?

Dmitry Medvedev: They accepted the invitation; is there anything wrong with that? Havana is going to celebrate its 500th anniversary soon, and a large representative delegation from the Russian Federation will attend. And there will be another visit along the Security Council lines, so our contacts are ongoing. We have fully restored our relations with Cuba.

Sergei Brilyov: So we are looking forward to something interesting in the foreseeable future.

Dmitry Medvedev: We hope our relations will become stronger with every new day. We would like this to happen.